It's almost that time, almost ready to start the countdown to Santa's visit!  My nephews (and me and the Hubbin too!) love tracking Santa on the NORAD Tracks Santa site.  I recently found out about the history of the Santa tracking and it's pretty cool. 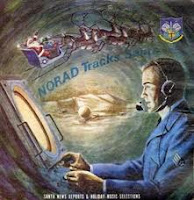 The program began on December 24, 1955 when a Sears department store placed an advertisement in a Colorado Springs newspaper which told children that they could telephone Santa Claus and included a number for them to call. However, the telephone number printed was incorrect and calls instead came through to Colorado Springs' Continental Air Defense Command (CONAD) Center. Colonel Shoup, who was on duty that night, told his staff to give all children that called in a "current location" for Santa Claus. A tradition began which continued when the North American Aerospace Defense Command (NORAD) replaced CONAD in 1958. -found at wikipedia here

I think just the simple fact that the Colonel decided to play along instead of just dismissing the screw-up is a Christmas Miracle in and of itself. 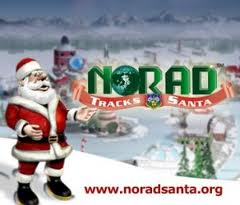 Another great article on the history of and continuation of the NORAD Santa Tracking program can be found at Tracking "Big Red" NORAD's Secret Santa Mission .

There are not too many books on the subject of tracking Santa, which is odd 'cause I can think of a million great stories that could be told.  Here are a couple I did find

How do you think Santa makes it around the world in one night?  Do you track Santa?  Do you know any good books about Santa Tracking?  Will you write one for me?