Had a blast with my Bubby, his wife and my Hubbin this weekend, which included watching the phenomenal movie The Martian...based on the book The Martian by Andy Weir.  My Hubbin asked me try and hold off on reading the book before watching the movie 'cause I have a bad habit of being "that person" during the movie who compares it to the book the whole time...I tried...I really tried, but we had a long distance transfer at work which resulted in a long trip home...and the book was there...As always SPOILERS AHEAD!!!! (for the book and movie) 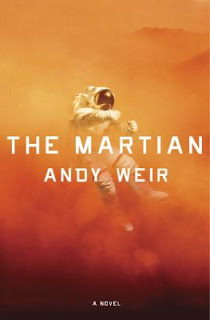 Mark Watney gets brutally ripped away from his crew during a massive storm.  Presumed dead by his crew mates (which makes sense 'cause his bio-readings show him dead) make an emergancy ascent to their ship the Hermes and head home.  Shockingly Watney survives his ordeal and is now stranded on Mars as the only living creature on the planet.  We follow Watney through his journal as he tries and plans on how to survive.  This is made a bit easier as he still has most of the equipment from the aborted mission at his disposal including potatoes which he plants using his own poo as fertilizer...I call them pootatos..get it...POOtatos hahahahahaha....ok...need to get back on track.  Watney realizes that everybody must think he is dead.  On a positive note, he also realizes that if he can survive long enough, the next Mars mission will be arriving in about 4 years.   Of course he not only needs to figure out how to survive that long, but how to navigate a ton of the planet to get to the new landing site.  Meanwhile back at NASA a series of satellite photos reveal that Watney is still alive.  This of course causes a huge stir and much discussing on the possibilities of his long term survival and the chances of rescuing him.  An unexpected boon happens when Watney gets a hold of Pathfinder and uses it to communicate with NASA.  They work together on several plans starting with a rushed probe to get him supplies.  This goes very wrong when certain variables are not accounted for.  Watney continues on his own with various plans, mishaps and revamping when things don't go his way...turns out he is a savvy botanist.  All hope seems lost when the Chinese reveal they have a probe that they are willing to donate to the cause in exchange for a spot on the next Mars expedition.  NASA plans on using this to send more food to Watney.  Meanwhile a kid named Rich Purnell figures that using the right calculations they can use the probe to resupply the Hermes the ship that the rest of Watney's crew is on and send them back to pick him up.  The problem is they only have one probe and must choose which plan to go with.  NASA director chooses the "safer" option of sending Watney food, only to be foiled when an anonymous person sends the plan to the crew of the Hermes who execute it without permission.  With no other option they go for the rescue plan and head back to Mars to pick up their missing crewman.  Back on Mars, Watney has overcome all kinds of stuff to finally get to the landing site where he is told how to strip pretty much everything off of the ascent vehicle.  After a couple of harrowing maneuvers the crew of the Hermes get their man back. And that is the  basic story. 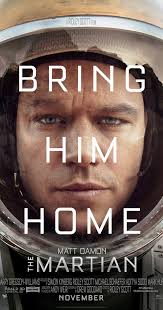 For some reason, every time I refer to this book I call it the astronaut instead of The Martian...not sure why...but there you go. What the synopsis does not do is convey the sheer personality of almost every single character in this book, it is just amazing to me  how varied, detailed and authentic each person has, while still being a pretty scientific novel.  This combination of personality and science (well as much science as one can have in a slightly futuristic fiction novel) really makes this book readable for several types of readers.  I especially enjoyed the sense of humor in what could have been a very dreary and depressing story.  The voice of Mark (which is the dominant one in this book) is my favorite as you watch him cycle through emotions, then get on with keeping himself alive.  He is smart, but sometimes messes up, he is scared, but not helpless, he is funny, but no inappropriate. A lot of the strength in this book comes in part from the format.  About 2/3 of the total book is a first person verbal journal style of Mark Watney and his time on Mars.  This works well 'cause his stream of conscious style suits his predicament and gives him ample opportunity to just talk things out.  This also gives us a lot of the humor as he pretty much says whatever comes to his brain as he records.  We also get a kind of real time "technical" peek into exactly how he is surviving.  This first person narrative is peppered with random flashbacks and the normal prose at NASA.  In the end we get to see things from both ends, get to know things the other end doesn't and laugh when Mark refuses to cooperate in a PC manner when they finally establish communication.  Another strength (for me anyways) is the beliveability of this book.  It is set just far enough into the future that we can assume certain technology is in regular use, but not so far that we loose the sense of familiarity.  The author is pretty good at giving scientific, yet not overly smarty pants explanations on to why something should or shouldn't work.  This makes it very easy to stay in this world the author has created.  I am also very into Mars and follow news of it closely and even have the Curiosity Rover T-shirt so this book spoke to that very much.  I loved the tone of this book, I loved the world, I loved the characters, I just really enjoyed this book.  I also LOVED the movie...not quit as much as the book of course, but it was still awesome.  It followed the book fairly well, and with out a doubt, kept the flavor and spirit of the book.  I would recommend this book to just about anybody with any interest in well, pretty much anybody.  With the exception of some gloriously placed swear words, this book is even suitable for the slightly younger crowd.  I give this book 8 out of 10 Pootatos and wish I had the patience to put in all of the awesome little sayings and quotes that make me smile and laugh out loud.  GO READ THIS BOOK!  Happy Reading Everybody!
Posted by NGHJ at 9:00 AM