Hey, so I totally thought I did a rambling on this book, mostly 'cause I am totally proud of the post title, 'cause seriously ninja nuns! That being said, I'm pretty sure I heard that phrase somewhere else so maybe I'm not as cool as I think.  This ramble is already getting rambley so let's get to it shall we?  The book is Grave Mercy the first book in the His Fair Assassins series by Robin LaFevers.  I have heard mixed reviews on this book so it took me a while to start it.  Which side of the coin did I land on?  Let's find out, as always SPOILERS AHEAD! 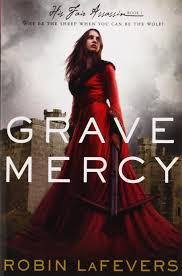 Ismae has just gone from her abusive father's house, to what will probably be an abusive husbands house.  She is rescued when her new spouse freaks when he see's a mark on her body that is there from when her mother tried to abort her with poison.  She is taken to a convent and trained as an assassin for the "saint-god" Mortain.  An old god that is now called a "saint" to make it more palatable to the Christians and Catholics of this time period.  Isame it turns out is especially good at poison's as she is immune to them.  Essentially the daughter's of Mortain are trained to carry out kills at the will of their god.  The marks are given to them by the blind seeress Sister Vereda who tells them who Mortain wants dead.  The assassin girl then will usually see a dark mark that indicates the manner in which the person is to be killed.  Ismae gets through her training, makes a couple of kills and is then paired with Duval a bastard noble as his "special friend" to go to court.  Turns out that one of the convent's most important tasks is getting Ann the Duchess of Brittany back on her throne and confirmed as ruler...not sure why Mortain cares...but there it is.  Ismae goes begrudgingly with Duval, who happens to be the over protective half brother of the Duchess and is installed in his household.  During her stay Ismae keeps feeling all kinds of feelings she doesn't understand for Duval, but that doesn't stop her from her duty's.  Ismae ferrets out all kinds of information, kills a couple people and gets in good with the Duchess.  Duval works mostly with her, in spite of his mother and brother schemeing, several important men vying for Ann's hand, and his obvious attraction for Ismae.  Ismae receives several disturbing orders from the convent and Duval asks her to consider the idea that at least some of what the convent does is driven by human need and want, and not solely by direct orders of Mortain.  Chaos and madness ensue and Duval gets himself all poisoned.  Ismae must leave him, dying to save the Duchess.  The Duchess and her kingdom is saved, most of the bad guys are at least identified and Ismae goes back to say good bye to Duval.  She meets Mortain in the flesh on the way back and is given the means with which to heal Duval...which coincidentally means getting nekkid with him.  Ismae after finding out more of the big picture and after actually meeting Mortain decides that the convent is not the be all end all of her existence.  The story ends there, with a promise of more to come. 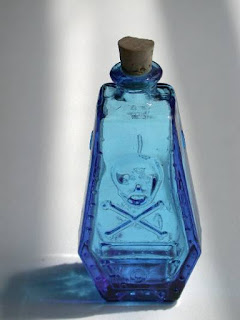 Contrary to my snarky tone in the above synopsis there were actually several things I really enjoyed about this book...and obviously a few things I didn't.  Let's start with the good shall we?  The premise is pretty darn awesome, I mean seriously a female religious order dedicated to death in it's most elegant form?!?  Kind of awesome.  The methods in which the girls used to carry out their assignments were pretty cool and out of professional curiosity kind of want to see how some of them work.  The  historic setting was fairly accurate and portrayed events that actually happened which I always find pretty neat.  The story flowed very smoothly, keeping my attention, and making it a book that I picked up very easily.  I liked some of the mythology we got with Mortain and some of the other "saints' mentioned in the book and would like to know more about them as well.  I actually probably enjoyed Duval most as a character.  He seemed to have a fairly reasonable head on his shoulders, a wicked sense of sarcasm, and an ability to come across as an intelligent, yet caring human being.  I didn't mind Ismae that much except for her over the top awareness of her own skin.  This seems to be a thing in YA books with any romance in them, especially set in earlier times.  If I had to read about her trembling, shivering anything, or the way her skin felt any time Duval touched her for any reason I was going to SCREAM.  I also hate how much time was devoted to Ismae's skin feeling things.  I was a teenager once, and I had crushes and my skin got touched and I never remember having any of these issues.  I think my biggest problem with Ismae as a character is that she was very inconsistent.  She was fierce...no wait she was fragile...no wait she was highly trained...no wait she doesn't know anything...no wait...and not in a round out the character way, but in a whatever felt convenient for the story way.  I never got a good fix on Ismae's personality like I did with some of the other characters, which was to bad 'cause I think she could have been pretty awesome.  In the end, despite my issues, I actually did enjoy the book and will finish the trilogy.  I give it 7 out of 10 pearls of poison and recommend it to anybody who likes European history, romance, or girls who know how to kill you 15 different ways.  Happy Reading Everybody!
Posted by NGHJ at 9:00 AM